Start a Wiki
The fast food restaurant McDonald's featured Recess toys in between December 25, 1998 (shortly before "Yes, Mikey, Santa Does Shave" premiered) to January 21, 1999. The set included seven figurines of the show's characters, and each was linked to a different kind of sport, having them come with a ball and sometimes hold an item relating to it.

The toys were released after the promotion for A Bug's Life and were replaced with toys promoting the video release of Mulan.

The toys were also part of a contest by McDonald's and Disney: the "Be on Recess" sweepstakes, where a winner of the contest would appear on the show. 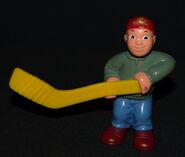 One of the Recess Happy Meal Bags

Add a photo to this gallery

Along with the toys, McDonald's and Disney was promoting a sweepstakes called "Be on Recess". The winner of the contest would appear on the show as an animated walk-on character. The winner was selected via a random drawing, and also won a trip with his or her family to Disneyland.

The contest was limited to kids aged three to twelve, and had to complete an official entry form.

The winner of the contest, Morgan, appeared in Season 4's "The Rules".

Christmas tree ornaments of the toys have been sold online. The ornaments are the toys themselves with a small hanger on their heads. These were not authorized by Disney.

Retrieved from "https://recess.fandom.com/wiki/Happy_Meal_Toys?oldid=41503"
Community content is available under CC-BY-SA unless otherwise noted.